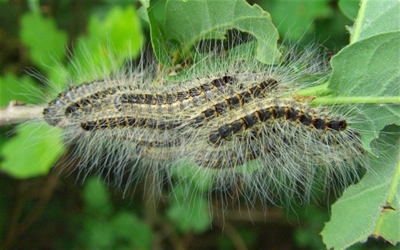 Oak Processionary Moth (OPM) caterpillars are present in Richmond Park in late Spring and early Summer. They are a danger to both people and animals and should not be touched. Their long hairs are highly infectious and can cause severe reactions requiring medical treatment.

See this 3 minute video by The Forestry Commission

To people and animals:

The caterpillars' thousands of tiny hairs which contain an urticating, or irritating, substance called thaumetopoein. Contact with the hairs can cause itching skin rashes and, less commonly, sore throats, breathing difficulties and eye problems. This can happen if people or animals touch the caterpillars or their nests, or if the hairs are blown into contact by the wind. The caterpillars can also shed the hairs as a defence mechanism, and lots of hairs are left in the nests, which is why nests should not be touched without protective clothing.

OPM caterpillars can threaten the health of several species of oak trees (Quercus species) because they feed on the leaves. Large populations can defoliate, or strip bare, large parts of oak trees, leaving them vulnerable to attack by other pests and diseases, and less able to withstand stresses such as drought and flood. They will only feed on other trees if they run short of oak leaves to eat, and have been seen on hornbeam, hazel, beech, sweet chestnut and birch trees.

DO:
• teach children not to touch or approach the nests or caterpillars;
• train or restrain pets from touching or approaching them;
• keep horses and livestock a safe distance from infested oak trees. Covering or stabling livestock can help;
• see a pharmacist for relief from skin or eye irritations after suspected OPM contact;
• call NHS111 or see a doctor if you think you or someone in your care has had a serious allergic reaction;
• consult a vet if you think your pet or livestock has been seriously affected;
• call in a pest control expert to remove infestations in your own trees;

How To Identify Them

OPM caterpillars are most easily recognised by their distinctive habit of moving about in late spring and early summer in nose-to-tail processions, from which they derive their name, and the fact that they live and feed almost exclusively on oak trees. They can sometimes be seen processing across the ground between oak trees, and clustering together as they feed on oak leaves.

The nests can occur in a range of shapes, including hemispherical (half a ball), tear-drop shaped, bag-like, and like a blanket stretched around part of a trunk or branch. Sizes range from as small as the width of a 50p coin to stretching several feet up the oak tree trunk in some cases. They can occur anywhere from ground level to high in the oak tree, and can fall out of oak trees and be found on the ground.

The caterpillars rest up in these nests during the day between feeding periods, and later in the summer they retreat into the nests to pupate into adult moths.