Cars return to the Park with restrictions on through-traffic The road on the western side of the Park between Kingston Gate, Ham Gate and Richmond Gate, including access to the disabled car park at Isabella, will be open to traffic at all times.

Cycling will be permitted on all the Park’s roads and the Tamsin Trail at all times, as before the lock-down, and recent restrictions on cycling have been lifted.

The trial will be monitored in partnership with local authorities and Transport for London and there will be a formal consultation with all Park visitors, residents and stakeholders in November and December.

Friends comment:
The Friends’ charitable objectives are to conserve and protect the peace and tranquillity of the Park and to ‘limit the adverse effects of activities that damage its attributes”, so we have always been in favour of reducing through traffic, especially in a National Nature Reserve. Lock-down has shown what the Park can be like without traffic and many people have commented to us and TRP, and on social media, that they would like it to continue in some form. The Royal Parks says that one aim of the trial is to create such a quiet zone on the northern side of the Park at weekends. We will monitor the trial to see whether it provides the benefits for the Park and its visitors, whether local or from further afield, that people are looking for. 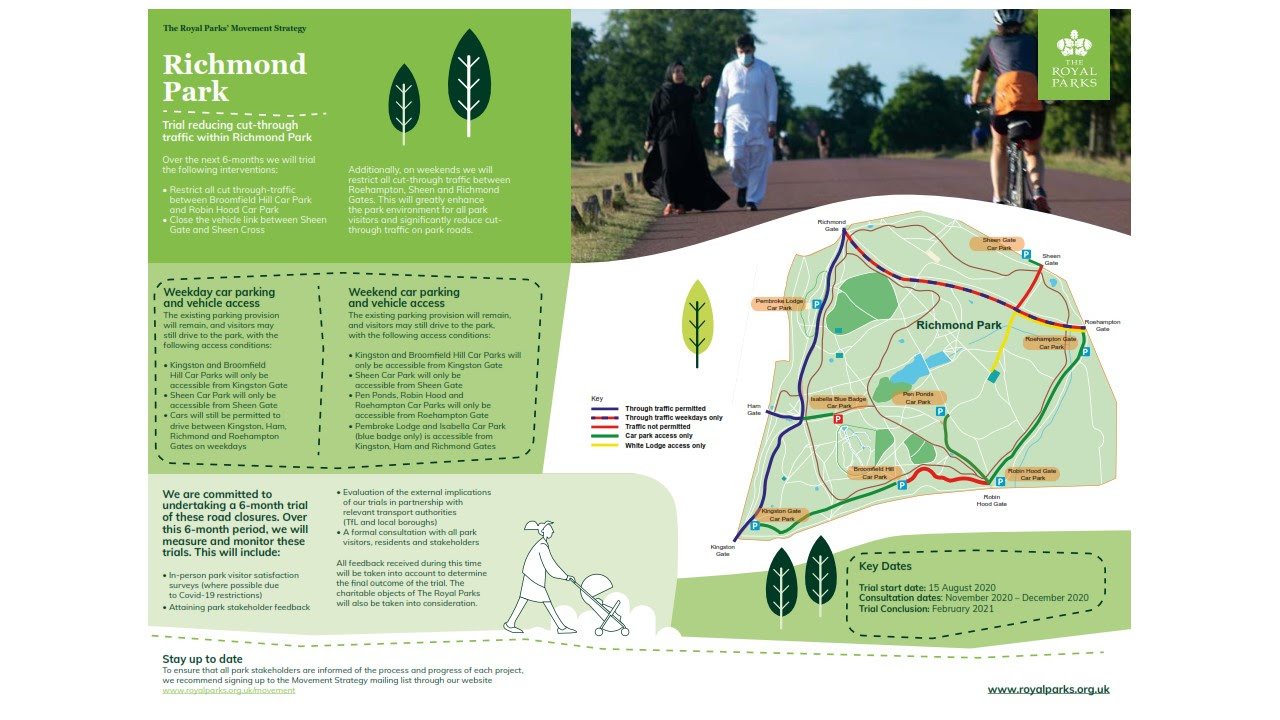 Here  is  the  Royal  Parks’  announcement:

The Royal Parks charity has begun trials to reduce cut-through motor traffic in Richmond and Bushy Parks, opening up new car-free spaces for visitors to enjoy the natural environment.

The trials will help protect and enhance these precious parks while balancing the needs of local communities. The trials will begin on 15th August, last six months and conclude in February 2021.

Richmond Park’s and Bushy Park’s wide, open spaces, grasslands and deer herds, create a tranquil oasis for Londoners. The parks are home to ancient trees and a wide range of rare species including fungi, birds, beetles, bats, grasses and wildflowers. Both parks have protected status as an important habitat for wildlife as Sites of Special Scientific Interest.

Bushy Park will see a full-time closure on Chestnut Avenue between Teddington and Hampton Court Gates to motor traffic. Visitors will still be able to drive and park vehicles but access to car parks will be from the closest gate only, with no driving through the park.

A weekday trial at Richmond Park will restrict all through-traffic between Broomfield Hill Car Park and Robin Hood Car Park and close the vehicle link between Sheen Gate and Sheen Cross.
Additionally, at Richmond Park on weekends, the trial will restrict all cut-through traffic between Roehampton, Sheen and Richmond Gates, ensuring this part of the park is a more enjoyable space for all park visitors.

Mat Bonomi, Head of Transport for The Royal Parks, said: “Richmond and Bushy Parks are much loved by local residents and those from further afield who are seeking to escape the hustle and bustle of the city for a breath of fresh air.
“The reduction of cut-through traffic in these parks has already dramatically changed them for the better, allowing visitors to experience their beauty without a backdrop of commuter traffic. Never before have we seen so many families and children walking, riding and playing on Chestnut Avenue.
“We believe this project will go a long way to reducing the negative effects of cut-through traffic. The trial will ensure all car parks are still accessible for those who need them.”

These are part of wider trials across all the Royal Parks. The charity has long aspired to reduce cut-through traffic. As a result of the Covid-19 crisis, the parks have been closed or partially closed to motor vehicles since the end of March and many of the proposed trial measures are already in place.

The beginning of the trials follows the launch of the charity’s Movement Strategy in July, which sets a coherent framework to help shape and inform the policies relating to how park visitors can access, experience and move within the parks and incorporated wide-ranging consultation across thousands of members of the public, transport partners and local Boroughs.

The trials will be measured and monitored through visitor satisfaction surveys in the parks (where possible due to Covid-19 restrictions), feedback from stakeholders – local organisations and residents and evaluating external implications in partnership with relevant transport authorities, including TfL and local boroughs. A formal consultation with all park visitors, residents and stakeholders will take place from November to December 2020.