Lyme disease can be diagnosed by ‘bull’s eye’ rash alone 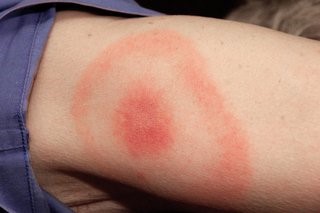 Lyme disease can be diagnosed by ‘bull’s eye’ rash alone

Lyme disease can be diagnosed by the rash alone, new advice for the NHS says.

People with the “bull’s eye” circular rash do not need a blood test and should be treated immediately to avoid complications, the National Institute for Health and Care Excellence says.

Waiting for lab results is unnecessary and can cause delays in patients being prescribed the antibiotics they need.

Symptoms can also include:

But if there is a delay in treatment, more severe symptoms can develop months or years later, including:

A growing number of high profile people have spoken out about their experiences of the problems of living with Lyme disease due to delayed diagnosis.

American model Bella Hadid has spoken of the challenges of continuing to work with the disease because she’s often exhausted and needs to take regular medication. Her mother, who starred in The Real Housewives of Beverly Hills, and Bella’s brother also have the disease.

Singer Avril Lavigne said it had taken months for her to be diagnosed with the disease, which had left her bedridden for two years. She got the first symptoms on tour, when she was achy, fatigued and couldn’t get out of bed. She said she had felt so bad at one point she had “accepted that I was dying”.

Former England rugby player Matt Dawson got the disease after being bitten by a tick in a London park in 2015. It caused a bacterial infection to spread through his body and eventually left him needing heart surgery.