Richmond Park’s marvellous migrants and remarkable residents – new video
See and hear some of the most celebrated migrant & resident birds of Richmond Park in this excellent 13 minute film, produced and narrated by Richard Gray for The Friends of Richmond Park. Watch it here

Richmond Park film has record views
The Friends’ award winning film Richmond Park: National Nature Reserve has now had over 300,000 views, and growing (currently 322,831). If you haven’t seen it already it’s a must watch. Watch it here

Volunteers needed for our social media, website and email bulletin
We are looking for additional help with our social media presence as this has grown substantially and we are planning an expansion of our online shop for the autumn. We have an active website, a regular ebulletin as well as 13,000 followers on Facebook, 2,700 on Twitter and 2,200 on Instagram.

If you have social marketing or communications experience, we would love to talk to you about how you could help. This might be through a limited, one-off involvement to advise us, or an ongoing social media role managing our online presence.  These roles can be carried out at times convenient to you and at home. It might be possible for one person to do both.

We are also looking for experienced help for our WordPress website, adding content and liaising with our content management support, and help in producing our monthly email bulletin
If you would like to discuss this with us, please complete a Volunteer Application Form

Noise & Light Volunteers wanted
In last month’s Bulletin we asked for volunteers to help with light and noise measuring to support our campaigning, e.g. against building developments around the Park or proposed new flight paths. We had three people offer to help, but we’d like to have 2-3 more. No experience is needed; we have the equipment and can provide training.
Interested? Please complete our short volunteer application form and email it to the address given. 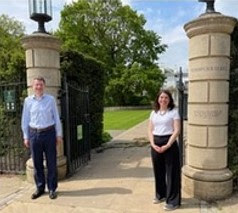 Last week our new Chairman, Roger Hillyer, met Sarah Olney MP for the Richmond Park constituency.  They discussed the Friends work in advocating the protection and conservation of the Park. They also discussed some of the ongoing issues of concern in the Park.
P
New book on Richmond Park
Alex Saberi’s new book Richmond Park, London’s wildlife haven will be on sale at the Visitor Centre from Sunday 6 June, priced at £14.95. Alex has been photographing in the Park for many years. You can see some of his photos here.

6 things you should know about deer birthing
The Royal Parks has produced a useful 6 point guide on deer birthing. It’s worth a look, see it here.
A reminder that the dogs on leads policy continues through June and until Mon 2 August 2021. It applies to all areas of the Park.

E-scooters not permitted in Richmond Park
A 12-month trial by Transport for London (TfL) of E-scooter rentals begins this month, in several London boroughs, including Richmond and Hammersmith & Fulham. Only E-scooters that are part of this rental trial can be used legally; any that are not part of the trial remain illegal to use other than on private land (with the landowner’s permission). Therefore, it’s an offence to ride them in public – including on paths, pavements and roads – and offenders could receive an on-the-spot fine of £300 and six penalty points.

In Richmond Park and the other Royal Parks, no E-scooters are permitted, whether rented from TFL or privately owned. See The Royal Parks’ statement

Discoverers – Bee Awareness
The first Discoverers activity this year will  be – ‘Bee Awareness’- with two local bee keepers and live honey bees – on 4th July at the Holly Lodge Centre. Look for booking details nearer the time on the Discoverers web page.
Discoverers Mailing List members will get early notification of this event.’

Guided Walks
Why not join us on one of our popular guided walks? They are restarting and are free and open to all.  We meet up at one of the car parks and walks start at 10.00am, and end around 12.00pm.

Quarterly Newsletter – online option
Friends members who  receive the Spring, Summer and Autumn Newsletters as a printed booklet,  may prefer instead to receive them as a pdf document that can be download. If so, please email Chris Mason at: membership@frp.org.uk
Past issues of newsletters as pdfs are here on our website

Park activities return
As coronavirus measures are eased, the use of the park has started to return to normal.  The limited events that have taken place already have all had to consider social distancing measures.  After 21st June we expect events such as Parkrun that attract a larger number of people to return.  Indoor seating has already returned to both Pembroke Lodge and Roehampton Café.  The number of tables is still restricted and well-spaced so at peak times these can become full quite quickly. After the 21stJune (date subject to changing Government advice) we anticipate very few remaining restrictions.

Oak Tortrix Moth
Oak trees are known for the high number of species they support. Large numbers of moth caterpillars eat their leaves which in turn provide food for small birds, who then supply birds of prey! The caterpillar numbers can be very high but by and large the ecosystem stays in balance with a variety of moth caterpillars’ species emerging at different times of the year and nibbling at leaves at a rate that balances leaf growth.

However, a few species of moth (and most notably the Oak Tortrix Moth) can produce large numbers of caterpillars over a short period and have the potential to defoliate trees. This does not occur on every tree, nor every year and whilst it could have a detrimental impact on a tree’s vitality, re-growth later in the season partially compensates for defoliating in May and June. It does however contribute to the overall stress that trees endure alongside other factors. This year has seen many oak trees across the park being defoliated. We can only speculate if the weather has impacted nesting birds who are less effective predating caterpillars.

New coffee kiosks
The Royal Parks are working with our catering concession to increase the number of coffee outlets in Richmond Park.  One location is at Kingston Gate where we currently have a seasonal ice cream van at Kingston car park.  We are looking to repurpose the former gate keepers hut near Kingston Gate toilets into a small coffee kiosk.  We are also exploring the potential to place a coffee kiosk near to sheen gate.  Here there is a seasonal ice cream seller that operates outside the park on the road, but the new facility would be for coffees, inside the park.  We trust park visitors will appreciate the service being offered and recognise the need for the charity that runs the park to generate income.

Dragonflies and Damselflies
June is a good time to look out for dragonflies in the reedy margins of ponds and streams.  These are frequented by the Emperor dragonfly, the Brown Hawker, the Broad-bodied Chaser and the Black-tailed Skimmer, along with the Common Blue, Blue-tailed and Large Red damselflies.

Rhododendrons
The spectacular flowering of the evergreen azaleas is nearly over and the stage is left to the late rhododendrons and deciduous azaleas, many of which are fragrant.

Bog Garden
The huge prickly leaves of the Gunnera manicata conceal its stout flowering spikes, and contrast with delicate fern fronds and the ribbed, glaucous leaves of hostas. Here and elsewhere bordering the streams, you will find Primula japonica, a candelabra type, in its red, white and magenta forms; lilac-purple Primula beesiana and fragrant yellow Primula florindae. Several iris species are also in flower, including Iris pseudoacorus, our native yellow flag. The Day Lilly, Hemerocallis hyperion, with its lemon-yellow flowers also grows in the beds beside the stream. The new island bed looks stunning at this time of year with the fern Dryopteris erythrosora showing coppery pink young fronds and the Swamp Honeysuckle, Rhododendron viscosum, bearing its spicily fragrant, white flowers.

The Birthday Mound
Digitalis purpurea ‘Alba’, the “White foxglove” is naturalised throughout this area which was planted in 2003 to celebrate Isabella’s 50th anniversary. This european native produces spikes of white bell-shaped flowers with a maroon spotted throat from a rosette of rich green leaves.

Stream Side
Along the Main Stream look out for Galax urceolata, a clump forming perennial with large, round, leathery, mid-green leaves which turn bronze in autumn. It has dense spikes of small, white flowers.

Flowering shrubs and trees worth seeking out 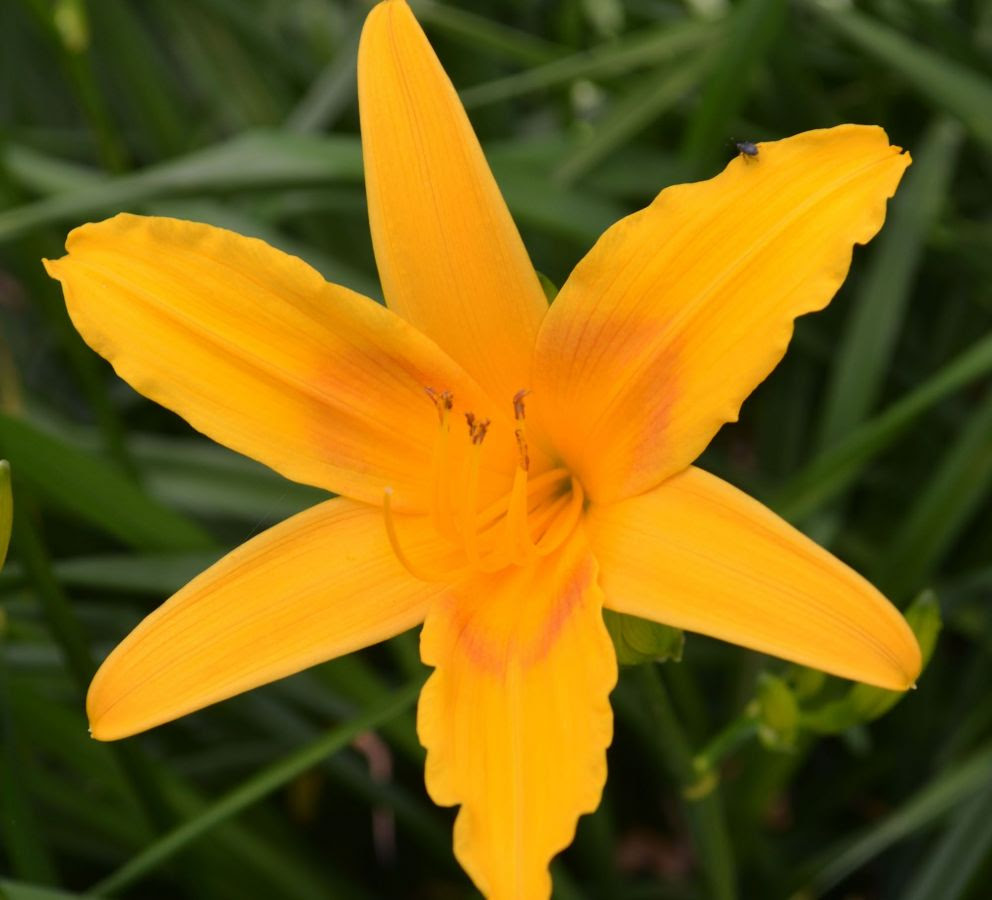